Newspapers Association of India,General Secretary,Vipin Gaur’s new role was announced at a formal program at YMCA auditorium in New Delhi.

Vipin Gaur,General secretary of Newspapers Association of India,was appointed as the North India chairman of Scouts and Guides.

The formal program of the appointment was held at the YMCA Auditorium,New Delhi,in which,Chief Guest,was,Founder of Film City Noida and Marwah Studio,Scout Chief of India,Sandeep Marwah, Commissioner of Scouts and Guides,Dr. Raj KP Sinha,Dhananjay Kumar and Vikas Sharma with many distinguished guests,many journalists and many activists of Scouts and Guides took part in the program.

Speaking on the occasion,Sandeep Marwah ,film city noida founder and scout chief of India, said that the way Vipin is leading NAI, with his effective leadership in the field of journalism, his role in scout and guide will be valuable and could lead further he said.

Thanking the official concerned for giving this responsibility, Dr.Vipin Gaur said, that while he was young he had joined NCC with a dream of joining defence force to serve the country. Now with this role I would strive hard to fulfill my dream and serve motherland.

I’ll try to do my best to serve in this role and take the scout and guide to reach others schools which are left out.

Through this the children can be discipline snd Nation building and maintain peace and harmony in the society he added.

Dr. Raj KP Sinha,who was also present on the occasion said that he us happy to have gour in the organisation who can give a different dimension to the scouts and guide to take it forward he said. 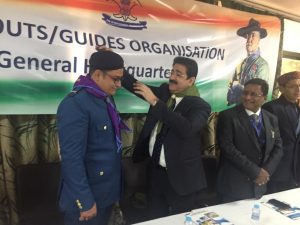 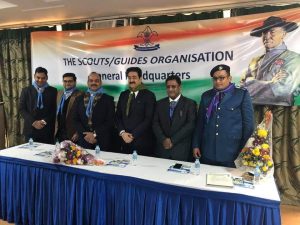