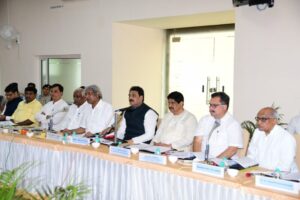 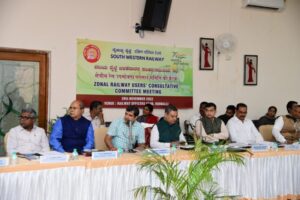 he 22nd meeting of the Zonal Railway Users Consultative Committee on South Western Railway was held today at Hubballi.

The meeting was chaired by General Manager, Sanjeev Kishore.

The meeting is convened for better representation of railway users and for consultation between Railway Administration and users on matters relating to the services provided by Railways.

In today’s meeting,issues and concerns pertaining to passenger amenities, train service and Infrastructure Development were discussed in detail.

General Manager,Sanjeev Kishore welcomed all the members and mentioned that SWR has performed well on several fronts.

He highlighted several achievements such as launching of first Vande Bharat Express of South India between Mysuru and MGR Chennai Central by Hon’ble PM,redevelopment of several stations such as Belagavi,Hosapete,Davangere etc.

He said station development Bengaluru Cantonment and Yesvantpur are also being undertaken.

The punctuality of SWR stood at 94.10 % placing SWR as the 4th most punctual zone of the country.

He further mentioned that 83 number of special trains run and 1798 number of additional coaches were added for the convenience of the passengers during festival and holiday seasons.

He further elaborated upon infrastructure development projects and assured that SWR is leaving no stone unturned in adding new line, doubling and electrification.He mentioned that already 52% of SWR network is already electrified.

Members were also briefed about various issues related to passenger amenities,infrastructure development, train services like additional stoppage, increase in frequency of trains and construction of ROBs/RUBs.

ZRUCC Members who attended the meeting: