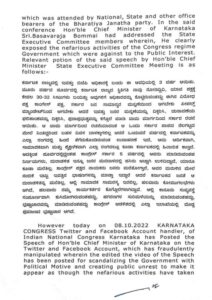 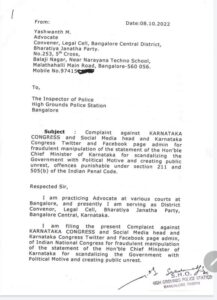 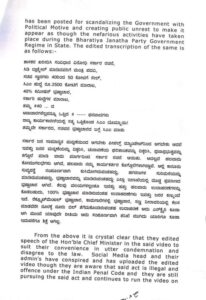 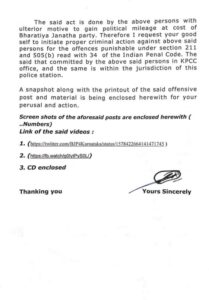 embers of the BJP legal cell on Saturday filed a complaint against the opposition Congress party for allegedly editing the video of the Chief Minister’s speech in such a way as to give a different meaning to the speech and posting the edited video on the official social media pages of the Karnataka Congress with the malicious intention of spreading slander against the BJP.

The legal cell demanded immediate and appropriate legal action against the social media heads of Karnataka Congress and the admins of the said pages for criminally editing the Chief Minister’s speech and maliciously posting it on social media,the police officials have promised to take immediate action.

Yogendra Hodaghatta,the state convener of the BJP Legal Cell,M.Yashwanth the complainant and Shivakumar Yadav lodged a complaint at the High Ground Police Station in Bangalore demanded that the accused should be booked under section 211 and section 505b of the IPC.

In the complaint,Mr.Yeshwanth said that congress parts and administrators of the party social media accounts uploaded the distorted videos of the Chief Minister by manipulating the statement during his speech at a national executive meeting .

This is to scandalize with political motive to create public unrest .

Since the manipulation and distortion of the videos was created at the KPCC office situated at the jurisdiction of the High grounds police,the complaint has been filed at the same police station seeking legal action,he said.