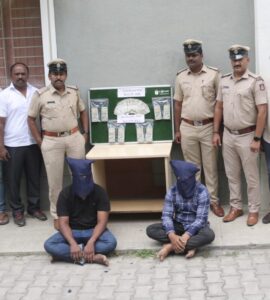 he Ramamurthynagar police on Friday arrested two members of a robbery gang and recovered Rs.4 lakh which they along with their associates had stolen from the bootspace of the parked scooter in front of an ATM of SBI Bank Opposite Hormavu Main Road on June 15.

The accused have been identified as Vijesh and Gopi.

Senior officer told reporters,the duo accused hailed from Tamil Nadu while others were on the run.

During investigation it was found that the accused modus operandi is to wait for people who would come to bank to withdraw heavy cash and follow them to steal the cash.

The victim Albert Joseph had withdrawn Rs.4 lakh and kept it in the bootspace of his scooter . On the way he stopped the scooter near an ATM to withdraw some more cash.

While the victim was busy in the ATM the accused break open the seat,took the cash and escaped .

The incident came to light when the victim returned to his scooter and found the cash missing.

Based on the complaint,the police analyzed the CCTV footage and identify the accused through the bike they were using and arrested them.

The duo was taken into custody to ascertain possible involvement in other cases while efforts are on to track the other members of the gang he added.