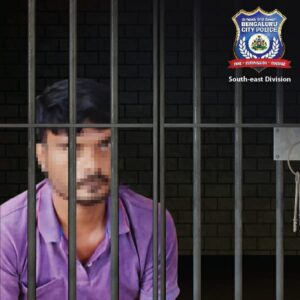 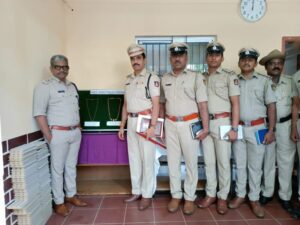 The accused Amul Balasaab Shinde,using his professional bike riding skills created havoc in the states of Maharastra,AP and Tamil Nadu with his chain snatching spree,before he entered the city in the last week of July and took the help of his associate Jitu bora to get logistic help.

Senior officer told reporters,Based on the complaint,a special team headed by Mr.Choudhari and team swung into action and analyzed over 212 CCTV footage from the reverse directions to identify his location.

RS Choudhari,Inspector,Mico Layout station,who track down the accused with his conventional method of policing,said that Amul had stayed in a OYO room on Bannerghatta road and tampered the registration plate of the hoodwink the police .

He would move around the city to target women walking alone near parks during evening time,his targets are always women since there are minimal resistance and the time he had selected to get a cover as even if there are cctv cameras,it would not capture the image due to bad light .

Using this technique the accused committed two chain snatching back to back at Mico layout and JP Nagar.

After zeroing in on the location he profile the area and set up a watch team who managed to pin him down finally .

The police recovered two chains worth Rs.6.5 lakh from him while efforts are on to track down his associate who is presently on the run.

The accused had committed several chain snatching in Chennai and arrested.But he managed to come out on bail and came to city and committed two offences before moving to other metros.

DCP Southeast, CK Baba said,Habitual Offender Forging partnerships in prison With over 30 cases across boundaries,Interstate chain snatching in MH,AP,TN and had just put his 🐾 in Bengaluru when Our ever alert team Caught him
with gold worth 6.75L,
Now cooling heels as our guest! DCP CK Baba said in his tweet.