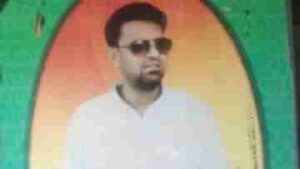 48-year-old former BBMP councilor was stabbed to death by his nephew over a trivial row in Tipu Nagar on Wednesday.

The deceased Ayub Khan is a realtor and also president of Khudadaad mosque for the last 15 years .

Nazima Khanum,wife of Ayub Khan and BBMP councilor for ward no.139 K R market ward in her complaint to the Chamarajapet police alleged that Mateen,nephew of Ayub Khan is eyeing for the president post and was fighting with Ayub to make him the President.

Mateen had fought with Ayub a six months ago and tried to attack him with knife over the same issue,but with the interventions of the matter was resolved and considering the relationship,Ayub did not file complaint.

On Tuesday night Mateen confronted Ayub with the same issue stating that his dream of becoming prsident of the mosque will not be fulfilled until Ayub is alive .

But the neighbours intervened and sent him away.

On Wednesday evening at around 7.15 when Ayub was waling out of mosque after evening prayers,heading home,the accused confronted him and stabbed him before Ayub could react.

Passersby and the children of Ayub tried to nab Mateen but he escaped.The profusely bleeding Ayub with a deep stab injury on his stomach was rushed to a private hospital where he succumbed on Thursday morning .

Based on the complaint,the Chamarajpet police have registered a case of murder and efforts are on to track down Mateen said a senior officer.