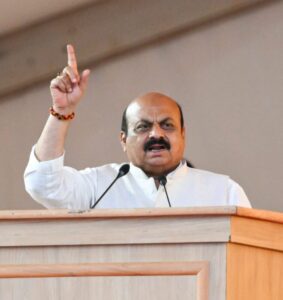 Prime Minister Narendra Modi is on a mission to make India a $5 Trillion economy.Karnataka has resolved to contribute $1.25 Trillion to the Indian economy to realise Modi’s objective,Chief Minister Basavaraj Bommai said.

The Chief Minister was speaking at a function at Mysuru Maharaja College Grounds where Prime Minister Narendra Modi laid the foundation stone for New Railway Coaching Complex to come up at Naganahalli and development of Mysuru Railway Station,and inaugurated All India Institute of Speech and Hearing Centre of Excellence.

“We all need to strive hard to make this contribution.We need to work 20 hours a day. Economy is not just about money,it is about energy and work of the people,Bommai said.

He was eager to come to Mysuru on International Yoga Day for many years.His determination to celebrate the Day here in Mysuru proves his special love for Mysuru.

He has completed 8 years as the Prime Minister in his 20 years of public life.While the earlier Prime Ministers were keen on power politics, Modi is devoted to politics for public welfare, Bommai said.

The Prime Minister is striving to raise india’s stature among the comity of nations,Bommai said.

All Round development of Mysuru

This is a double engine government effectively implementing the schemes of the union government.

We are committed to the overall development of Mysuru.

The Mysuru Tourism Circuit would be started this year, the project to expand Mysuru airport has been approved, Rs.89 cr grant has been provided for upgradation of KR Hospital, hostels for working women are being built in Mysuru, knowledge based industries would be set up in Mysuru.

I have full confidence that in the coming days you will strengthen the hands of Modi and once again bring the double engine government to power to keep the development works going,” Bommai said.