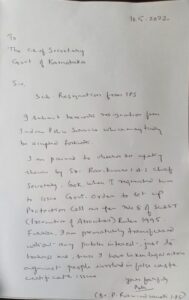 enior IPS officer and Director General of Police Recruitment on who is transferred recently, tendered his resignation on Tuesday citing that he is being targeted for taking action against people involved in fake caste certificate issues.

In his letter submitted to Chief Secretary,Mr.P Ravindranath said that he was pained to observe the apathy shown by the Chief Secretary,when he had requested him to issue government order to set up protection cell as per the rules 8 of SC/ST ( prevention of atrocities ) rules 1995.

He further said that he has been prematurely transferred without public interest,just to harass since he has taken legal action against people involved in fake caste certificate issues.

It may be recalled that Dr.Ravindranath had recently held a press conference to announce that he is probing the fake certificate cases pertaining to the Daughter of MLA Renukacharya and family members of MLC .

This apart many upper caste families in western ghats have obtained fake SC/ST caste certificate which are being probed by Mr.Ravindramath and recommended the authorities concerned to initiate legal action.

This could be the reason for his premature transfer against the service rules which barred transfer of officer within 2 years .

Mr. Ravindranath who was heading Directorate of civil rights enforcement was transferred as DGP Training.

This is the fourth time,he is tendering resignation as earlier he had resigned alleging harassment from his seniors and also objecting the government to sidelining him during promotion.