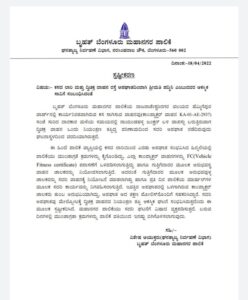 40-year-old woman was killed on the spot after a garbage truck ran over her at Nayandahalli junction on Mysuru Road.

The deceased has been identified as Padmini D., a resident of RR.Nagar,who was a bank employee at St.Marks Road.

Senior officers with the Byatarayanapura Traffic Police rushed to the spot soon after the incident, as traffic was also affected on the busy road for some time.

A senior police officer after visiting the spot and collecting information from his officers and eyewitness said that the incident occurred around 8 p.m,and she was heading towards Nayandahalli junction on her scooter.

It is alleged that the truck,said to be speeding,rammed into her vehicle and ran over her after she slipped down.

She died on the spot and the police shifted the body to Victoria Hospital for the post-mortem. The body will be handed over to her family on Tuesday.

The truck driver ran away soon after people gathered at the accident spot .A case of death due to rash and negligent driving has been taken up and efforts are on to nab him,the police said.

It further said that after two incidents of garbage trucks ran over two persons we have sensitised all the truck drivers and even checked their fitness certificate and a workshop was help to educate the drivers.

After the incidents the Marshalls are on daily basis checking the trucks and sensitising the drivers to drive slow and follow traffic rules and we are co-operating with the police the official release says.