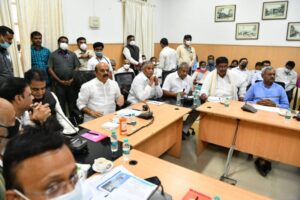 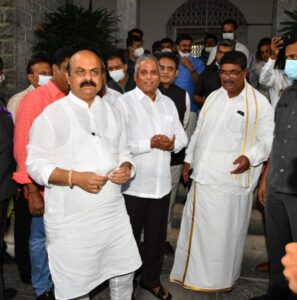 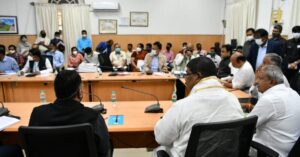 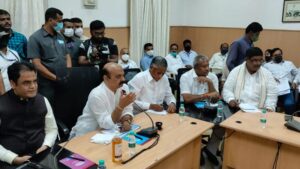 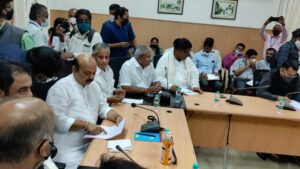 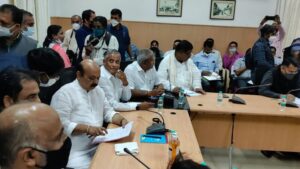 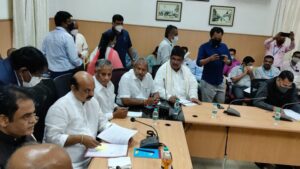 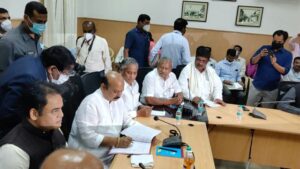 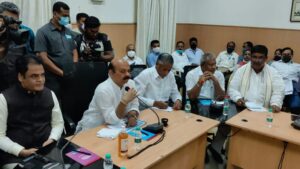 *Time bound completion of works on Primary Drains in the city.

*Take up works immediately to prevent flooding of houses and roads.

*Take up works under NDRF and SDRF without delay. Complete the works before January.

*CM to personally review progress of Primary Drains on CM’s Dash Board every fortnight.

*CM to call up engineers personally to seek information on progress of works and those found lax in the works would be suspended.

*Remove the encroachments without any mercy.

*Immediate approvals would be given for Comprehensive Plan based on ground realities to address the flooding issue permanently.

*All the works should be completed within one and a half years.

*Dilapidated drains should get RCC lining for smooth flow of flood waters.

*Officers should work with commitment and work would be reallocated for engineers.

*Untreated water should not be let into rain water drains. Treatment plans should be augmented for this.

*A separate meeting would be called to provide power, drains and drinking water in BDA layout.

Chief Minister,Basavaraj Bommai has instructed the officials to complete 30km of Rajakaluves(major storm water drains) in Bengaluru by the end of January.

Speaking to media persons after a meeting at BBMP head office in the backdrop of flooding in various parts of the city due to incessant rains, Bommai said,the meeting discussed about the immediate action for widening and repair of Rajakaluves to increase their carrying capacity to avoid flooding of low lying areas down stream of the lakes in the city.

The present stone-lined Rajakaluves need to have RCC lining.The Rajakaluves in outskirts of the city have mud lining which also needs to be turned into RCC canals.

They also need to be widened.Action is needed to remove obstacles at many places for smooth flow of flood waters,Bommai said.

Executive Engineers have been instructed to monitor the progress of works in their respective limits.

The city has about 842km of Rajakaluves across the 4 valleys–Vrishabhavati, Hebbal,Chellaghatta and Koramangala.

There are 94 critical spots which needs to be rectified. I have obtained details on this. I have instructed completion of these works within 2 months,” Bommai said.

Work on 51km of Primary Drains and 38km of secondary drains should be taken up immediately.

BBMP Special Commissioner,has been instructed to prepare the DPR for this project which would cost Rs900cr.

Special grants would be provided for this and instructions have been issued for speedy completion of the works without disturbing the general public,Bommai said.

Bommai also said that he had instructed the BWSSB Chairman for speedy completion of underground drainage works taken up in many layouts with the objective of providing permanent solution.

BBMP has been instructed to desilt the small drains.The Chief Minister instructed the officials to prepare a comprehensive plan based on prevailing conditions to address the flooding problem permanently in all the 4 valleys in the city.

Ministers who represent various constituencies in the city, who participated in the meeting, also issued a slew of orders based on their experience of the problem.

For the first time work is on to provide permanent solution for the complex problem,Bommai said.

About 2626 encroached structures have been identified on Rajakaluves of which 1480 have been cleared.

Legal action has been initiated for eviction of 714 structures. The operation would be carried out without causing inconveninence for the poor by giving them time, while big builders would be acted on immediately, he said.

BBMP has been instructed to recruit 130 engineers on contract basis to oversee the civic works, he said.Replying to a question on filling potholes in city roads,Bommai said work would be taken up immediately after stoppage of rains in the city.