The East Divisions Special Investigation Team (SIT) formed to probe the prevalence of fake stamp papers in the city, has arrested five persons who are allegedly part of a printing fake stamp papers and circulating it in market.

The Govindapura police have also recovered 663 fake empty stamp papers and 136 franked fake stamp papers of a total face value of Rs.63.57 lakh of various denominations ranging from Rs.2 to Rs.25,000 from them.

City Police Commissioner,Kamal Pant,briefed media at his office in the presence of Addl CP East,S Murugan,DCP East Dr SD Sharanappa,and others were present,Kamal Pant said a PIL was filed by a victim in the court stating that a group of people are printing stamp papers to register properties to help land grabbing racket but also causing huge revenue loss to state exchequer.

To curb this menace High court issued direction to city commissionerate to curb the menace and nab the culprits who are involved in the organised syndicate and based on the direction by High court we formed a SIT team to probe the case under DCP East,Dr SD Sharanappa.

Acting on a tip-off that fake stamp papers were being sold on the premises of the city civil court and magistrate courts,four special teams kept a close watch on dealers under surveillance from past one and half months and after getting confirmation the team went as decoys,and bought fake stamp papers.

After confirmation,the team approached court for search warrant after getting permission from the court the teams raided the houses of the accused on November 13 and arrested five persons.

During conducting search the SIT team also recovered seals in the name of State Bank of Mysore,two screen printing machines used to print the fake stamp papers and 233 empty papers with the watermark ‘Government of India’ among other incriminating evidence.

A detailed investigation it has revealed that,Baba a habitual offender arrested earlier in a similar case is a kingpin of the racket.

Pant said the team seized fake stamp papers worth Rs.63 lakh from them. The accused even printed old revenue stamp papers of the eartwhile 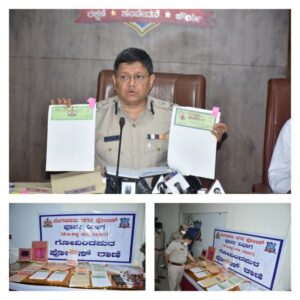 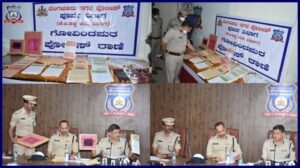 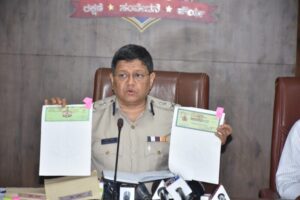 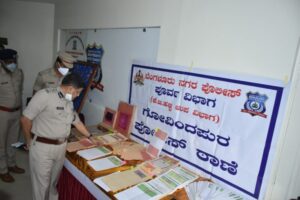 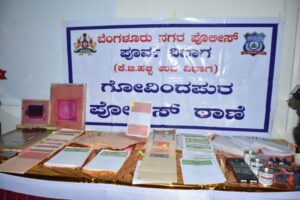 mysore king period.The police are further checking how the accused are printing and circulating the stamp papers.

These predated fake stamp papers are used in the realty sector to forge fake documents of disputed properties and to earn easy money and lead a lavish life.

City Police Commissioner, Kamal Pant has announced a reward of Rs.50,000 for the team that cracked the case and appreciated Addl CP EastS Murugan,DCP East,Dr SD Sharanappa,ACP, Ningappa B Sakkiri,PIs,as,Prakash R,Melwin Francis, Santhosh Kumar L,Vasanth Kumar and his team as,PSI, Amaresh,ASI,Suresh K,and crime staff as,Sathish Kumar,Anand,BM Hunavad, Chinnaswamy,Smt.Chaitra DN,Ms.Kashi Bai,has successfully conducted raids on the criminals house and arrested kingpin of the racket and his associates who were cheating the court and government too in printing and circulating fake stamp papers a meticulous investigation by the team has busted the racket he added.