Startingtoday,bidders across the globe can purchasethe ITT document fromwww.pklmediaauction.com(Tender Portal). Each bidder will be required to register themselves on the Tender Portal, pay the relevant amount, and upload required documents for downloading and accessing the ITT. The ITT can be purchased from the Tender Portal at INR 2,50,000 (Rupees Two lakh fifty thousand only) plus taxes for entities incorporated in India andUSD 3,500 (United States Dollars Three thousand five hundred only) plus taxes for entities incorporated outside India (in both cases non-refundable and non-adjustable). 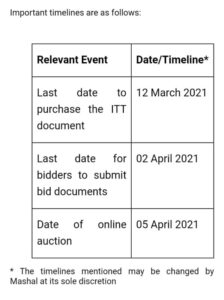 Expressing his delight on the ITT announcement, Anupam Goswami, CEO – Mashal Sports & League Commissioner of the Pro Kabaddi League said, “Pro Kabaddi League has led the renaissance of India’s indigenous sport of kabaddi by creating a world-class sport spectacle. Season after season, Mashal Sports has worked towards elevating the competition and athletic standards, along with fan and consumer engagement. The success has been built with our key partners AKFI, the PKL Teams, as well as Star as the media partner for Seasons 1 – 7. We are confident that the upcoming PKL media rights auction will enable the League to grow to a new level, for a renewed and stronger engagement with sports fans and consumers, and further grow the sport of Kabaddi. Of course, we take great pride in the fact that PKL will be the first league outside cricket to auction its media rights.”

The shortlisted, eligible bidders can subsequently place bids for one or more of the following media rights packages, through an e-auction process:

Package C: This consists of Gaming Rights which includes rights to operate a fantasy league; create, produce or offer mobile, computer or console games, e-sport and other kabaddi games.

Package D: This is the Consolidated Rights Package i.e. all media rights offered under Packages A, B and C.

The details regarding the media rights packages, terms and conditions governing the submission, evaluation of bids including eligibility requirements and performance obligations in respect to each media rights package are contained in the ITT available on the Tender Portal.

Important timelines are as follows: